Xi'an, previously called Chang'an, has been around for 3000 years, and served as the capital for 13 different dynasties.  It was the final point on the Silk Road, and the first international metropolis with a population of over 1 million people.
Random notes from Xi'an explorations:
* Riding a rental bike across the top of the entire Xi'an wall which encloses the inner city was pretty cool.  The same twangy cricket soundtrack was being piped in along the entire route (about 20km?).  But at times the sound of "It's a Small World After All" wafted up from below - an ice cream truck?, making an interesting mix.  Chirpy single gear mountain bike, smell of exhaust and rubber. View of skyscrapers outside the wall was faded by smog.  A kite here, the sound of a woman singing some opera in the park there.  Saw a temple built by the government in the 1700's to unify Mongolians, Han, and other ethnic groups. (Pic: the top of the city wall.) 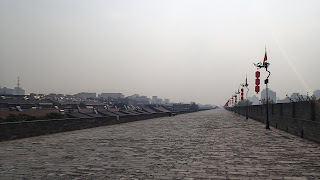 * After 1.5hr of bus rides and a hike to the entrance past tons of vendors, the terracotta museum was a bit sparse.  Fought through the roving gangs of tour groups to get  a peek at the warriors.  You aren't able to get in very close.  The exhibition hall was most interesting.  Was surprised to learn that this mausoleum was built in the 3rd century BC. Learned that convicts were used in the construction, that the construction took 38 years and started when the emperor was 13. An entire city was constructed, and from the outset, it was intended to be buried. ? (Did I read that right?)  His children were all killed after he died, for political reasons. (Pic: The main pit.  This is as close as you get to the warriors.) 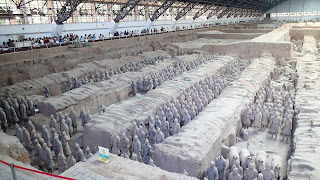 * Xi'an, Beijing (and the rest of China?) is made for cars, buses; people are squeezed out.  Terror of crossing a 7 lane boulevard.  Buses *will* run you over when they hook right.  Cross the street in packs for safety.   In Boston, the streets are made for people; cars are squeezed out.  (No right on red; pedestrian crossings, etc)  (Pic: a more pedestrian friendly street view) 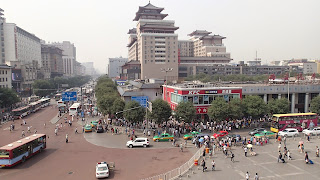 * Enjoying the street food: noodles. Tea-eggs.  Ice cream.  Diet food.
* I think I discovered the spot that my aunts must have bought my sister and me souvenirs when we were in elementary school.  I remember cherishing the parasol, outfit, stamp with red ink, fan. Was there a little box too?  The vendors here are selling many of those things.
Other random thoughts
* Still musing on how English would sound if it was spoken with the same intonations as Chinese.
* Watching people live can be travel - watching people make noodles, play in parks, push carts, sit and eat - but it's less so in modern society, where more life is lived inside, in cars, and most certainly not on bustling side walks of multi-lane boulevards.  Default city design has less room for outdoor mingling, so more of travel turns into chasing down designated sights, that are often about historical life.
* How much of what's modern is authentically built (built as a archetypical version of itself, not a copy or imitation), and does that matter from a historical perspective?  The hostel I'm in now is in a faux hutong.  Cheesy park entrances - "Snow Big Park" at the Terracotta museum and black bear exhibits at base of the Great Wall.  Will it matter how they are regarded today when they are viewed in 2000 years?  ("Why were there black bear bones here?")  Were archeological structures we look at now deemed worthy of being viewed 2000+ years later?  At the Terracotta museum, reproductions of the emperor's acrobats were made.  I wonder if anyone thought, "Those silly acrobats, so showy & garish."
* I like how camera-friendly people here are.  If they see you pointing a camera at them, they're likely to turn and smile.  I am worried about the alternative though - that they don't like your presence or your camera, but will never tell you because that's sometimes not acceptable in this culture?
* If China's a country of only-children, I wonder what impact that has on the overall culture?  Could that create a generation of super-millenials - more demanding and entitled than Western millenials?
* Fashion differences in China.  My theory - since it seems most people in China air-dry their clothes instead of using dryers, they can use different materials more frequently.  Lace, chiffon, etc.
Sent from my iPad
Posted by Robin B at 8:09 AM