Since Khorog, the days have begun to blur together.  I've been less than faithful to my journal writing, so that's probably partially to blame.
Here are some snippets...
***
Last Wednesday
The roads have deteriorated to dirt, rocks, as we've approached Dushanbe.  The cute villages along the river valley are sometimes more challenging to ride through, as they often have worse roads.   Sometimes, I don't even see the people saying hello to me, because my eyes are on potholes, dirt patches, etc.  (That is, until several cheeky girls form a human chain across the road... Stop!)
The road along the Panj River is quite interesting.  There are parallel roads on each side, but this side is Tajik; that side: Afghan.  In between, the swift - now dirty gray river that generally makes crossing impossible.  The road appears to be rougher and more cut into the cliffside on the other side; sometiimes obscured by landslides.  Out of nowhere, there will be a single man walking along the opposite side (to where? he's a long way from everywhere); or a saddled donkey; or a herd of goats.  The roads undulate on both sides - sometimes the Tajik side rises, and the Afghan side falls... The villages on the other side look more ancient - flat-roofed cobbled buildings.  At one bend of the river, the flat bank of the Afghan yielded quite a large town.  In the middle, a yellow building with columns - it looked like a La Quinta Inn to me - but someone said it was a mosque.
Jovid says many of the people on the other side are Tajik, and that Tajikistanians go into Afghan bazaars to sell their goods.  But Francine said some local she talked to turned their nose up at the idea of going to Afghanistan.
If I were a little kid on the Tajik side, I'd be watching the Afghan kids as they lead their parallel lives. They are close enough to sign to, or send smoke signals, or shoot guns at.    They could be living the exact same lives on both sides of the river, but they are separated by a country boundary, different politics.
***
Last Wednesday
These roads are beating me up.  I eeked out the 116km yesterday, but bailed on the 87km today at 37km.  Truly, my gut hasn't been right, but also, I just don't feel like spring chicken.
Food is key. I've just stocked up on Snickers, Mars  Bars, and RC Cola (who knew that these would become staples?), and I also have some AlpenGold chocolate, pringles, and plastic-wrapped, gel-ed chicken legs from China.  I really need to get smarter about my eating.  On a ride in the US, I'd never leave home without stuffing my pockets with bananas and other good things. Here, one must be a little more thoughtful to obtain snacks that are needed... You can't find the stuff you'd have at home, and you don't know when you'll run across the next stop.  After running out of food and water on one ride, I've learned to stuff my paniers with junk food to keep me going.
***
Last Thursday
Above me I can see the tree tops swaying in the wind, but I can't hear them or feel the wind.  I'm in my bubble of a tent; black mesh, no rainfly that separates me from the world.  Outside, I can see a woman and her little girl milking a cow... 3 cows were tied to 3 nearby trees for the night.  Also, I know that somewhere nearby there are army men with guns, who don't want us wandering towards the river that separates us from Afghanistan.  I guess they seriously patrol the area... Unfortunately, Mary and I didn't know this when we followed Daniel's directions down to a little swimming hole between 2 big rocks; just barely separated from the wild, churning chocolate milk river.  We washed our hair, and lounged around on the rocks; with a  nice view of the dirt Afghan road opposite the river (we never saw anyone); and the mountain stream backed by mountains on the Tajik side.
***
Today
A few days more down the river, and I'm managing the distances on dirt roads better.  But my stomach is getting tired of cola and pure sugar.  Fortunately, bananas have turned up at lunch!
After 4 or 5 days along the river, we climbed on dirt roads out of the river valley.  A couple of days along some fairly well-paved highway roads.  Kids still yell hello, but the interactions are more loose and casual. 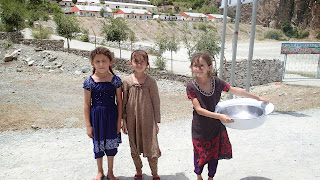