From Kashgar into the mountains

I'm about to ride into the mountains and Kyrgyzstan with the Tour d'Afrique tour. The next 21 days will consist of 19 days of camping, which means little access to showers and wifi. :(

Today we ride 60 miles to an immigration checkpoint. Tomorrow there is 8000 feet of climbing, ending at 10,000 ft altitude. So much for a warmup ride! The 3rd day we cross the border, and we're told to expect to be stuck at the border for 4 or 5 hours. We ride for 4 days straight, and rest in the little less-than-a-town pit stop of Sary Tash.

I've been in Kashgar for 3 days now. This area is very interesting and much different from the rest of China. Xinjiang province (where I'm at now) is home to 10 million Uyghers, an ethnic group that is more Turkic than Han Chinese. They have tanner skin, rounder, sometimes greener eyes. Most of the women dress in beautifully colored dresses and scarves, but some cover their heads completely, draping a brown cloth completely over theri faces. The men wear ornate skull caps, sometimes longer goat beards. They are Muslim, and have their own language, which is a simplified Arabic. 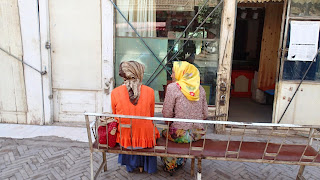 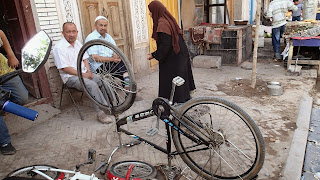 Exiting the airport, I fairly immediately was helped out by some local guys to get a taxi.  4 or 5 guys got involved in tying my bike long side up into the trunk of an regular sized car.  The couple who could speak some english made sure my driver knew where to take me.

I don't know how big this city is, but it feels like the country.  Motor bikes zip past the cars and cross through the dirt median.  I watched as one moto-cart with 2 guys and 2 sheep in it did this - the guys were staring at me, the foreigner; and I was staring at their round-bottomed sheep stumbling as the cart hit rocky ground.

The air is not clear here because it is dusty, from the nearby desert.  From the air, I could see how Kashgar is hugged by mountains.  It looks like the riding will definitely be uphill.

At the hotel, 2 men helped me carry my stuff into the hotel, and refused payment.

The tour group seems like a good bunch of characters.  Everyone seemed a bit beat down by the section they had just finished, which involved back-to-back 110 mile segments through a desert with a strong headwind.  People have given plenty of advice and seem quite supportive.

A bit nervous, but ready to get started.