Last year I did the informal Midnight Marathon Bike Ride.  Up til that point, my road bike had been sitting in a box, still packed up from my move out to Boston from Arizona.  But my friend Sam from Texas convinced me to ride out to his place near Lexington, where a friend of ours would drive us out to the marathon start at Hoptinkon, to join a bunch of crazies with bicycle lights in freezing weather to ride the Boston Marathon course in carnival-style in the middle of the night. 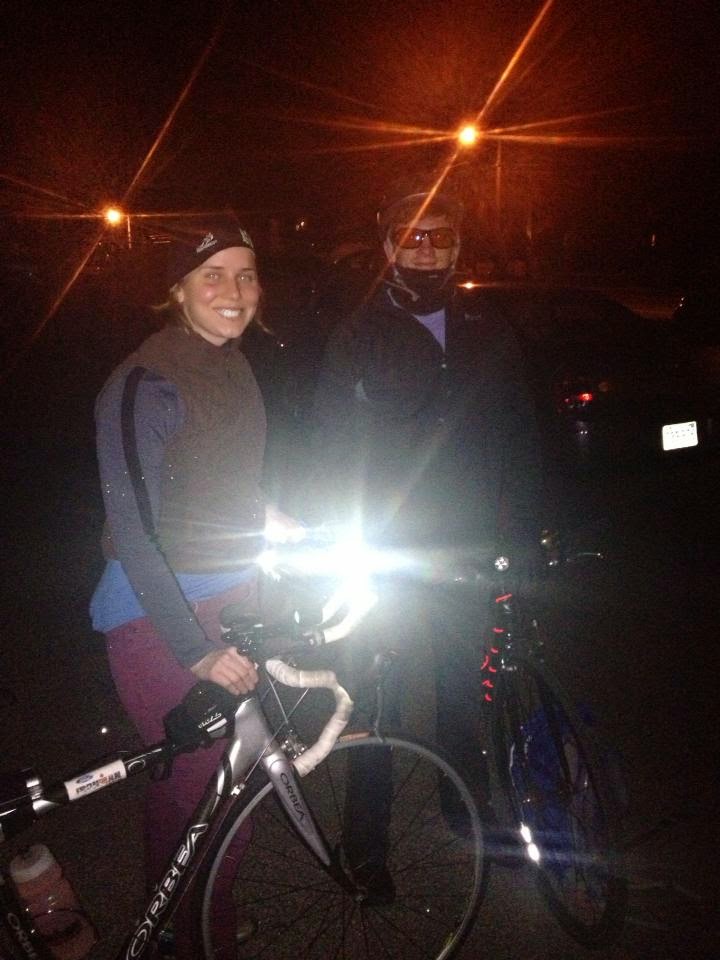 Did I mention? - it was freezing.  And this was the first 36 miles I was riding in about a year.  (10 miles to Sam's, 26 miles for the marathon route.)  But hey, the festivities!  The yahoos.  Great stuff.  We rode across the marathon finish around 3am – Copley Square was ghostly and still just hours before the race.

Only 6 hours later, I was bemoaning the fact that I wouldn't get to watch the marathon.  The finish line is less than 2 blocks from my work building, and I had never watched a Boston marathon.  Turned out my colleague and I had a business meeting in Alabama to get to that day.  After meeting up at work that morning, we shuffled off to the airport, around 10am or so.  When our flight landed at a layover airport, we were horrified to watch the news about the bombing.

I could have done the Marathon Ride again this year.  There was talk about canceling it, but the ride's original organizer told the officials he had no control to stop the ride from happening.  (After all, all the roads are open to traffic!)

But I am being responsible right now: I worked all day finishing up my last big paper / project for grad school!  (Whoop!)  I have class from 5pm-10pm tomorrow, and there is no way I can handle getting home at 3:30am, and stay focused for class.

Instead, I offered my bike to a friend-of-a-friend-of-a-friend from Arizona.  My best training buddy Kim, the hot air balloonist and triathlete from AZ, is in town with her husband who's running the race tomorrow.  Their friend's husband jumped on the idea of doing the midnight ride, and he's about my height.  I hauled him and my bike (the Vaya) to the start.  He bought a watermelon bike helmet and some arm warmers, and I reckon he's having a blast right now.